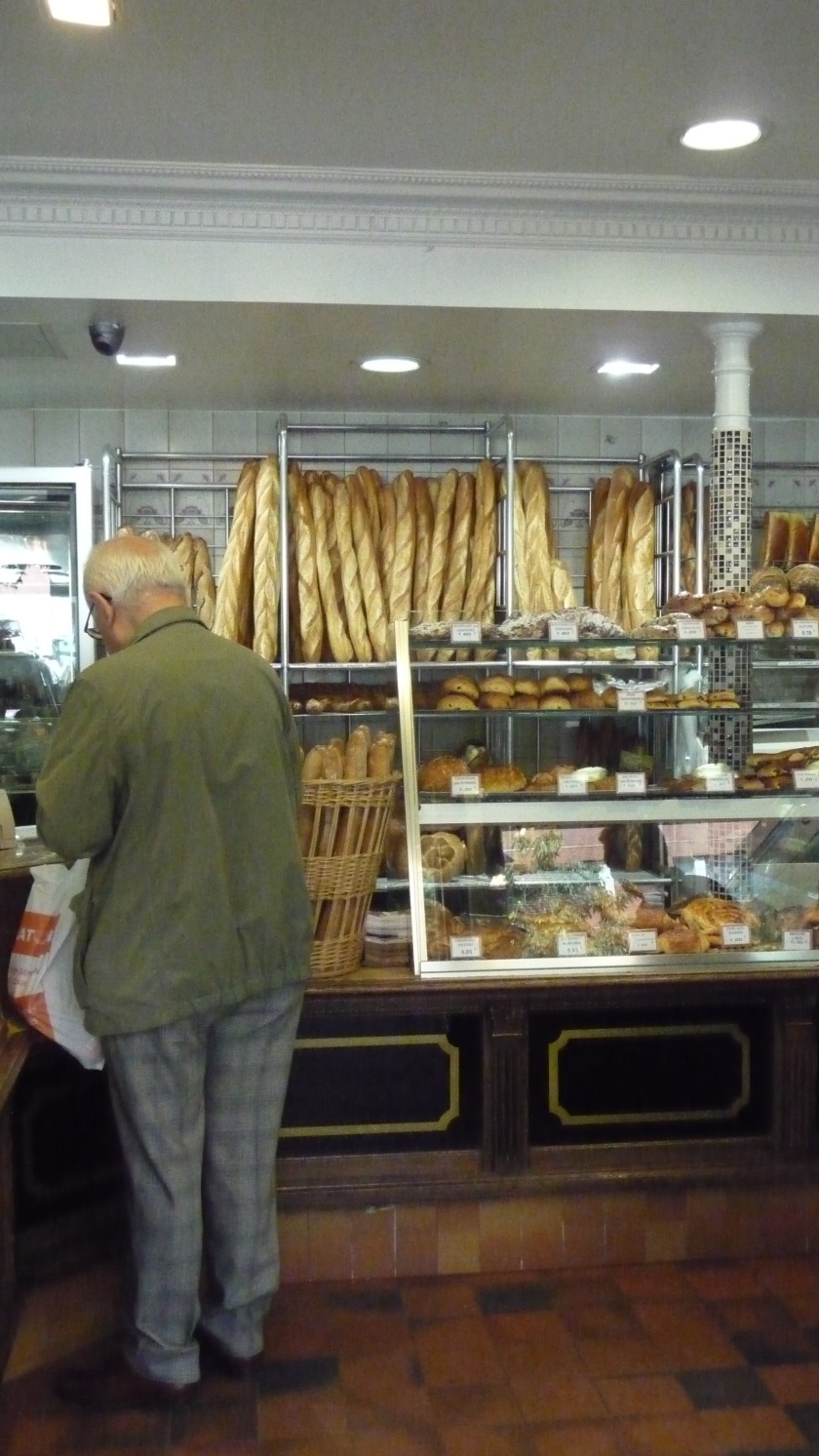 Or so I refer to my recent France excursion. The primary reason is that the French word for bread is pain, pronounced “pen” but without the N, however every time I look at that, all I can read is pain – as in- OUCH!

Having reduced (to nothing) my bread consumption prior to the tour, you would think I’d be ecstatic to do nothing but nosh on French croissants all the time! However, having an allergy to onions, meant that at some meals, the bread was all there was to eat. So, while I do love me some bread and butter, existing on bread and water and butter isn’t as much fun as you’d like to believe.

So, I should have been satisfied. And, I think for the main part I was satisfied. For most involved, the trip was a true success! The kids sang at La Madeleine and took part in a Mass at Notre Dame and did a very moving concert in the American Cemetery near Omaha Beach.

I went into this trip pretty darned stressed to get it all done before getting on the plane. The combination of a heavier than usual Spring Concert season and an increased work load, meant that I was scrambling to finish and make sure everything professionally, and personally, was in place before I left. Thus, I wasn’t very relaxed from the get-go. And, yes, I am in a foreign country seeing wonderful things, but I’m also working. With 13 chaperones and 78 children, there’s always something that needs a decision, direction or action. So, one pre-frazzled chorus manager ended up being a fairly frazzled chorus manager on tour.

Don’t get me wrong, there were some good times, and I saw some awesome things. Most of which were muted by whatever was going on, but still…

For example, we went to the Louvre, but had to wait for our turn to get in. Most groups wandered the shops that are underground near the entrance to the museum, but one group wanted to take the time to go over to the “lock” bridge. 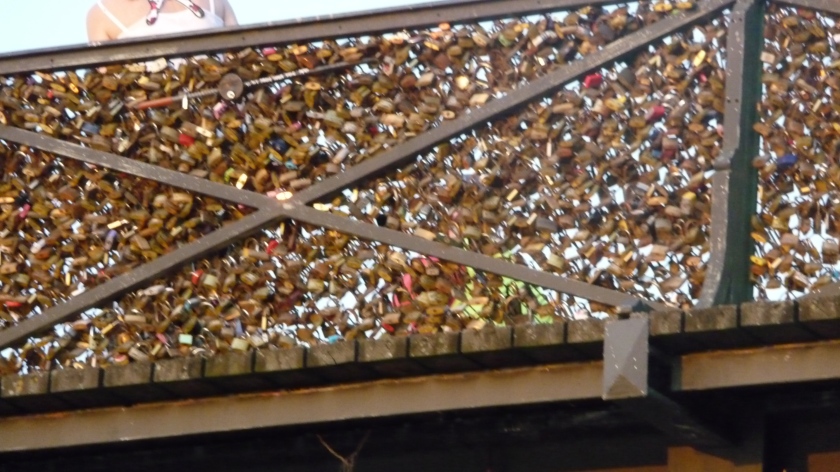 (The “lock bridge” is a place where lovers place a lock, with their initials written on it, on the bridge rails and then toss the key into the river Seine.)

As the time to enter the museum drew closer and all groups began to arrive to the meeting point, this group found itself on the surface without a way to get back to where we were. I sent the other groups into the Louvre and ended up going topside with our tour guide to figure a way for this group to be admitted. Once they were in, we raced to see the Mona Lisa (she’s really kinda small, actually) and then we were free to enjoy the remaining hour or so in the museum. 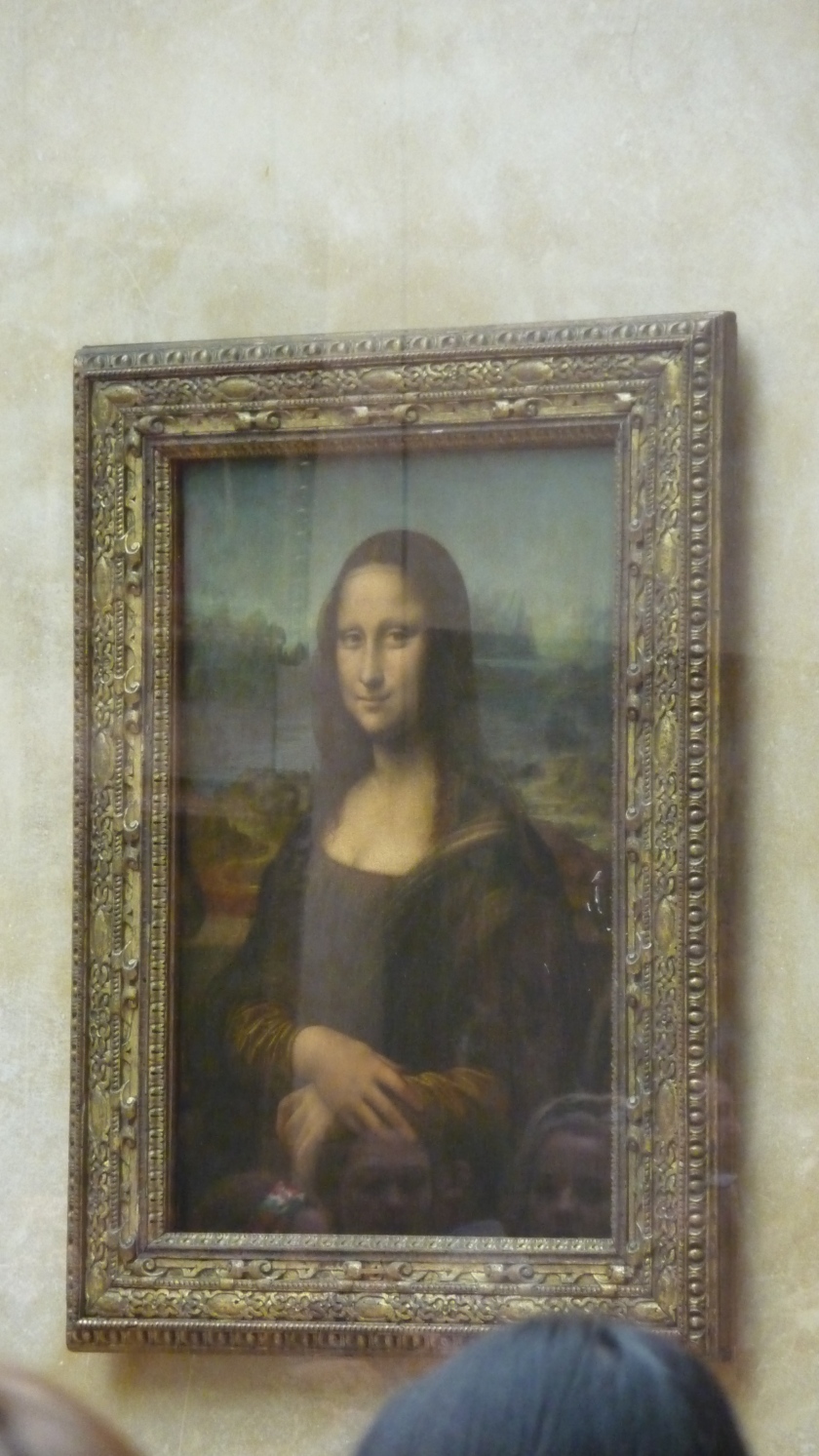 The Louvre. In an hour or so. Um, NOT happening.

So, Hubby and I decided we’d sort of do our usual cruising of the building, while keeping our eyes peeled for anyone who might be misplaced.

I think we looked at 3 paintings before my phone rang and I was told that two students were no longer with their group, and had last been seen on the floor we were on. Which means that all the art on the walls, much like my experience in the Sistine Chapel for similar reasons, ended up being a blur of color with an occasional glimpse of something that really caught my eye while I scanned the crowds for a familiar person in the “colour du jour” purple t-shirt.

Truly, I’m not complaining, although it sounds like it. It’s just work! It’s my job! Sure, I get to do my job in some pretty awesome places, but the end all and be all is that I’m working it, dude! And it can be draining at times.

Now, that being said. The chaperones were outstanding this time and I was so impressed with how well everyone did. Overall, it was a resounding success, so this makes me happy!

(See all the kids frolicking in the background?)

Another thing that makes me happy? The boss turned to me during the Farewell dinner and said, “How about we learn to waltz while in Austria?” To which I said, “I’m game if you are!”

So guess where we are going in 2015? Blood and Roses, here we come…

You know my life is strange when I’m happy about emulsification.

All work and no play makes Sharon a very angsty mess, so I decided to take on a challenge (isn’t that what EVERYONE does when they are feeling stressed and angsty??) to master the art of home-made mayonnaise.

I know, I know… don’t have a fainting spell. It’s actually easier than I thought it would be.

This morning I had an epic mayo fail. I spent about a half hour assembling ingredients, monitoring my blender and pouring in olive oil at a painfully slow pace. Still, the emulsification gods were not pleased with my efforts and what I got was a gloopy mess of smelly olive oil and egg mixture. Um. Ew. AND, I wasn’t clever enough to take a photo of said fail so you could share in my disappointment! I did put it in a zip lock baggie before I pitched it in the garbage, though. There, it can fester into some kind of toxic goo, only to be eventually absorbed back into the graceful arms of mother nature in about 6 bamillion (like my new word?) years, or whenever plastic actually breaks down. Good going, Sharon. Shall we label this a double fail?

So, I did a little research and found a few blogs and a video that let me know where I’d gone wrong. I marched my fanny off to the store and got the proper ingredients and with a determined jut of my chin, I decided I’d try it again. This time, however, I mixed myself some liquid courage first. Fondly known as Geezus Juice, I put ice in a cup, added one shot of Huckleberry Vodka, 2 Tablespoons of Lemon juice and 1 tablespoon of Cranberry concentrate, followed by a dropper full of liquid Lemon Stevia and some water. I stirred it up, put in my straw and took a long swig, and was ready to try my mayo again.

What I learned was that for proper emulsification to occur, you must have two main ingredients.

1. Everything must be clean and at room temperature.

2. You need patience. (This is where the Geezus Juice came in for me!)

Salt, pepper or other interesting herbs and spices as desired. I bought some chipotle to try later!

In a clean blender, food processor or a canning jar using a stick blender, combine the egg and the egg yolk. Add the lemon juice and let them get cozy for 20 minutes to an hour. (Long enough for them to be room temperature)

Once they are happy with each other and their surroundings, blend them up for 30 seconds or so. Then add your salt, mustard and spices and blend again for 30 seconds.

Next- there is some debate here… some say add 1/2 cup of your oil, others say 1/4 and still others say only a few teaspoons at first. Deciding to err on the side of caution, I started with 3 tsp. of oil and let that blend up for a few minutes.

Finally, and here is where the patience comes in, I started pouring in the rest of the cup of oil. You have to make it the smallest, slowest stream of oil you can possibly imagine. Just above a drop at a time. I was using a stick blender in a canning jar and my poor stick blender was so hot by the time I was done pouring (it took 6 minutes) I thought it might be toast! But by the time the last little drop of oil went in, things had thickened up (emulsified) and I was a happy camper!!

I capped the mayo, added an expiration date (that’s the same as the expiration on your eggs) and put it in the fridge to finish up it’s thickening process.

Voila!! Which is appropriate since mayonnaise is a French creation and I’m off to Paris in T- 37 days!

I know it’s kinda silly, but I’m happy it worked. By the way, should you try this at home, boys and girls, and emulsification eludes you, save the stuff you spent all that time blending. As long as you used a light olive oil, you can add spices and herbs and use it as a thin dressing on salads or a dip for veggies!