For some reason, Hubby and I were both up by 5:30 yesterday, so we went out to breakfast and went grocery shopping for the items needed for his birthday dinner. He wants some meatloaf and mashed potatoes. May sound ordinary to you, but mashed potatoes are a rarity here. We normally eat sweet potatoes because they are better for you than the common spud.

I came around an aisle and noticed that a cardboard display rack had some bulk packaging of spices in each display hole. These were high-end spices. Cinnamon, Cloves, Cardamom, Ginger and some Poultry seasoning. Each of the single jars run from 6-10.00 each and there were six jars per pack. Both Hubby and I knew they weren’t supposed to be packaged that way, so Hubby took a pack up to the manager so he’d be aware of the error.

When they both came back to the display area, the manager nodded his head and said thank you for alerting him, but in the meantime, go ahead and choose as many as we’d like in the bulk packaging.

If any of you bake out there, you’ll know that Cardamom alone is worth tons, and the single jar price is around $10.00 each and this man just offered us $60.00 in spices. I felt like I was falling back through time to the spice trade era and was wondering if I had some silk to spare…. nevertheless, we asked again and he offered for us to take whatever we wanted, so we did. I am now flush with about $130.00 worth of  cinnamon, cloves, ginger and cardamom and prepared for the baking season to begin.

But, that’s not all!

After putting away the groceries, we headed out to the local track to sit in the sunshine (beautiful day) and sip a few beers and watch the ponies run. We do bet, but our bets are usually no more than $2.00. 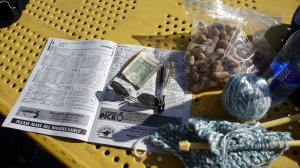 I’ve discussed my “system” for betting before, but as a brief review, I simply guess. It could be a name, or a color or a gut feeling that I have, but whatever it is, it usually works. On the first race I won $21.60. I should know to trust my guts by now, because right before Hubby went to place the bet, the thought crossed my mind that I should bet to win, but I decided Show would be good enough and off he went. If I’d stuck with my guts, I would have won $79.00, but I was happy with my $21.60.

We continued to enjoy the sunshine, and the $2.00 Hook and Ladder draft beers, winning and losing a few dollars here and there until I finally needed to use the ladies. On my way, I walked past the simulcast section and saw a man who was cheering on his horse, which isn’t anything different at a race track, but what was interesting was that it was so much like a song, it stopped me. Once he had finished cheering, I asked him what nationality he was because his cheering had such a sing-song quality that I just had to know. He told me he was from Trinidad and politely posed for a photo when I told him I’d probably include our encounter in  my blog.

In keeping with our theme, it was Military Appreciation Day at the track. There were military vehicles on display and a presentation of colors by a local color guard. They also held a Rody Race, where members of the military rode hoppity-hops on the track with a donation going towards a Military Recovery fund.

The rest of the afternoon passed nicely until the 8th race when Hubby and I liked the same horses. He took my choices and bet them two different ways, and since I’d been right on both horses, we won $185.00.  Granted, it’s not the MegaMillions Lottery or anything, but we were happy with it!

During most of the afternoon, we got to listen to a great band called “Sons of the Radio”. We even bought one of their CD’s. What can I say.. we support local musicians!

This is not at the track, but this is the band.

To end our day, we decided to go get some big juicy burgers after we went home to give the dog a bit of a run around the yard. As Hubby was walking out the door and had pulled the door shut he asked, “Do you have keys?”

Luckily, I had my cell phone in my purse and we got in touch with our son, who came and rescued us from having to sit hungry and cold on our front porch until our daughter came home from work. Because we appreciated him coming out to help his silly parents – and we just like being with out kids – we treated him to a burger as well.

Tomorrow on the Birthday Bash List of Events – Buffet Breakfast and Bowling!